Wild Arms is an Action-adventure Role Playing Game made for the Sony Playstation by Media Vision. It has a standard 2-D top-down design with many western and fantasy elements in it.

(From the American manual)

The world of Filgaia is now only a shell of what existed long before. Ages ago, under the protection of the Guardians, the world of Filgaia was a prosperous land filled with ancient and magical beings. It was a rich, green and fertile realm. All was well with the inhabitants of Filgaia... until a surprise invasion by a race of Metal Demons with bodies of steel robbed them of peace.

In order to survive, the three races of this world banded together. The Guardians and humans fought together with the Elws, a clever race that used technology laced with magic, to rid their planet of the alien demons. Working together, they forced the Metal Demons to the arctic edge of Filgaia where they have not been seen since. Having helped win the war to save Filgaia, the Elw became disenchanted by the greed and ruthlessness of the human race. They became alienated and abandoned Filgaia after seeing the rapid decline of the planet.

Even though the war to save Filgaia was won, the planet suffered terribly during the battle. Shortly after the war, plants began to disappear one by one until most of the grasslands were nothing more than desert wastelands.

As for the Guardians, the battle to save Filgaia drained them of their power, and they were lost to the myths of time. Although some still hold faith in the Guardians, they are now considered by most to be just one of the many legends that surround the old world.

Now, 1000 years later, the war is but a memory, and slowly a new civilization is rising from the ashes. But once again an ominous cloud hangs over the horizon. The Metal Demons, who witnessed the collapse of their own planet, Hiades, are preparing for the moment when they can once again descend upon Filgaia and claim it as their new home.

Three brave warriors will hear the call of the mythic Guardians. As they ready themselves to embark upon a journey to save their world, each is unaware of the others' existence as they are of their own fates. In a world brought to ruin under the merciless attack of an alien race, the wheels of fortune are about to turn.

For a few years, it was believed that the was originally an acronym ("Wild ARMs"), standing for 'Advanced Relic Machine' within the context of the game. This was, in fact, an error based on a fan interpretaiton of the all-capitalized version of the title, originating from the RPGamer fan website of the Japanese version of the title.

With the release of Wild Arms 4, and some confusion that the game brought, the entire franchise was officially listed without the acronyms and all capital letters, effectively solidifying the title to merely "Wild Arms".

A remake of this game, entitled Wild Arms Alter Code F, was released for the Playstation 2 console.

This game Wild Arms was included on the Playstation Classic mini console bundled with 20 games which was released on December 3, 2018 and it now has a save state feature. 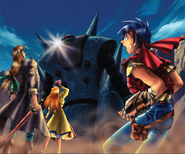 Cecília and the Tear Drop
Community content is available under CC-BY-SA unless otherwise noted.
Advertisement