Rudy Roughknight (ロディ・ラグナイト, lit. Rody Ragnite) is the central protagonist of the original Wild Arms and it's remake Wild Arms Alter Code: F. He is mostly a silent protagonist, though he does occasionally get a spoken line of dialogue or two. Rudy's story is that of an outsider desperately wanting to be accepted. He has always shown unique abilities, such as he ability to use ARMs or having abnormally high strength, and this has alienated him from the rest of society more than once.

Despite this emotional issue, Rudy is brave, noble, and selfless. When he is forced to sever his own arm to defeat Zeikfried, it is revealed by Vassim that he is an artificial lifeform, reconstructed as the legendary Holmcross weapon.

Rudy Roughknight was orphaned with the death of his adopted 'grandfather', Zepet Roughknight. He came under the care of Mayor Pifer (Tallman, in the remake) of Surf Village for several years until one of the village children Tony enters the Berry Cave. When Rudy goes to find the child, he is forced to use his ARM, the Hand Cannon in order to save him. The weapon, however, scares the villagers even more than the Zombie he had defeated and Rudy is exiled for his efforts.

Rudy becomes a 'Drifter' and falls quickly under the employ of Emma Hetfield in clearing out Lolithia's Tomb, along with Jack Van Burace and Cecilia Lynn Adlehyde. Once their mission is complete, demons invade the town of Adlehyde and his real adventure begins.

Rudy's affections are sought by both Cecilia and Jane Maxwell, and it's more than a hint that he returns their affections, but hasn't probably truly addressed his feelings for either of them. Indeed, when the love triangle is openly exposed, Rudy seems oblivious as to what the implications of it would mean. Both Hanpan and Jack, however, express their sympathy for his upcoming plight. In Wild Arms 5, however, Mariel is also pushed into the triangle, making it a quadrangle of sorts.

Though Rudy is, probably, the most in-depth character of the main group, he actually has very few lines, fulfilling his role of 'silent protagonist'. In the Alter Code version of the game, this is played up for laughs more than once, particularly in the final confrontation with Zed (who accuses him of constantly making jokes at Zed's expense). Rudy is not mute, however, as he does have some exposition lines to other characters, but they are told in a third-person style, unlike the rest of the game's narrative.

The character of Rudy represents 'Hope' in the game's narrative. In Alter Code, this is extended with a sequence in Surf Village where he finds acceptance from the very people who shunned him at the beginning of the game.

Known as a "Dream Chaser", Rudy has wandered across the vast wastelands of his world searching for a place to belong. Though he is only the innocent age of 15, he has the makings of a great warrior. Skilled in the use of weapons of mass destruction (known as ARMs) of Filgaia's forgotten ancient civilization, Rudy often escapes trouble through his superior firepower. Rudy was last seen working in the frontier village of Surf.

Rudy is a kind boy with a true sense of justice. He inherited a gun from his grandfather called "ARM", which is a powerful weapon that is activated by a person's will. However, "ARM" is widely believed to be an evil power, which belongs to the demon invaders and caused the ruin of mother earth. Because of it, people are afraid of "ARM" and distrust Rudy. He has no choice but to be a wanderer because of this. As he wanders the world, he meets Jack and Cecilia, and thus beings a new chapter in his life.

"Young Drifter with a Quiet Smile"

The hero and main character in Wild Arms. A silent, kind-hearted hero who is kicked out of Surf Village for wielding ARMs to save a little boy.

List of ARMs Rudy Roughknight can use in Wild Arms.

Rudy, along with Cecilia and Jack, can be summoned as part of a powerful group attack called "Kindred Souls", which the player can only use after collecting all 6 of the "Familiar Tale" items scattered throughout Filgaia. He is featured in a cutscene where not only does he get dialog, but an actual voice.

Cecilia: "Everyone has...things they care about in their hearts."
Jack: "To keep them from destroying everything...!"
Rudy: "We'll go as far as it takes. Put your hearts together!"

Rudy appears as a minor cameo at Cavam Valley Train Station as a 'boy with a pleasant smile'. It's slightly off-model here, missing his trademark 'band-aid' on his cheek. He also actually engages in a brief conversation. He's also involved in a sidequest where the player has to give one out of three letters given by cameo Cecilia, Mariel, and Jane of Wild Arms. The reward differs depending on whose letter you give to him, though it seems he later visits the one whose letter you deliver.

Rudy is, for all intents and purposes, a powerful attacker with an emphasis on HP and defense. In the original Wild Arms, his ARMs options are some of the highest damage dealers in the game. He is still equally as powerful in Alter Code: F. Rudy has no MP in either game and no magical abilities to note. Due to this, his magic defense is the worst of the party and he takes a lot of damage from enemy spells and elemental special attacks. His speed is also the lowest, so his turn comes last a great deal of the time. While he does gain the ability to summon Guardians in the original Wild Arms, his damage output is very low due to his minimal magic stat.

Rudy's ARM starts of with ATK Bonus of 10, AIM Bonus of 8, 3 bullets, Easiness of 1, and Critical of 1.5, and Boosted Shell as the Cartridge. His default attack command is "Shot", and if he runs out of bullets, he'll do a physical attack (which, compared to his ARM, pathetic damage). It only costs gella to upgrade his ARM, though the costs increase with each upgrade. If he doesn't auto-reload, he needs to defend to reload.

His Force Ability is Lock-On (costs 25 FP, ensuring the shot will hit), and is upgradeable by choosing one answer out of three during a certain point of the game. Each upgrade has its own benefits, but they still retain the 100% hit rate of Lock-On.

To upgrade the number of a cartridge's use, the player needs to spend Alter Parts and gella. Other cartridges will become available as the game progresses.

Unlike the PS1 version, he doesn't use a sword/knife; instead his Hand Cannon is his sole weapon throughout the game. 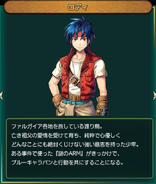