Levin Brenton is one of the main playable characters in Wild Arms XF. 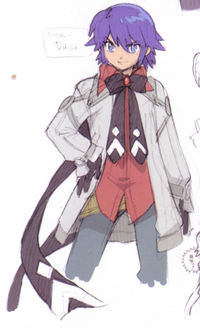 Levin looks like a mix of Dean Stark from Wild Arms 5 and Jude Maverick from Wild Arms 4 (the coat, the bow-tie, etc.) There is even a piece of concept art depicting Dean wearing Levin's outfit, which might imply that Levin's character was recycled from an early draft of Dean.

He is a scion of one of the most powerful noble families of Elesius, and one of Labrynthia's former students. He is incredibly quick and agile, which makes up for his somewhat indifferent magic skills. Desperately wants others (especially Clarissa) to see him as the hero, he is often reckless and impulsive and frequently charges blindly into situations he's ill-prepared to deal with. He has a crush on Clarissa, but she doesn't seem too interested in him, even though they are very much alike.[3]

Levin, as a Martial Mage, has great movement, only one space after Tony. Levin stat-wise is average in magic and strength, and lacks the power to be a powerhouse in early levels, but as he gains more levels and training him in both a Secutor and Elementalist class for their parameters increase his potential to take down enemies quickly, especially with his wide movement and Blast skill. Late in the game, after you gain access to the Emulator job class, Levin's personal skills allow him to use this class' skills more effectively.

Act-1: Path of the Founding Knights

Levin receives a letter from his former teacher, Labyrinthia Wordsworth, giving him information on the destruction of Poliasha and that he should mobilize the iron wall of Elesius the Royal Guard. He tells his father, the leader of the Royal Guard, Eisen, to mobilize the Royal Guard, but his request is denied. He then decides to meet up with the rest of the party at Creedmore prison.

He makes it to the prison before the rest of the party and decides to create a distraction. Levin then bears witness to Clarissa rallying the prisoners to escape the prison with everyone (except Labyrinthia and Felius) believing she is Princess Royal Alexia Lynn Elesius. They all fight the enemy forces, and all of the prisoners escape. Levin tries to talk to Clarissa, but is cut off by Labyrinthia and goes home.

While home, Levin tries again to convince his father to try and mobilize the Royal Guard, but his father will not budge on the subject and threatens to disown Levin if he leaves to help Clarissa on her pursuit. A discouraged Levin leaves his father and mansion behind.

Later Levin meets up with Clarissa and the rest of the party on their way back from the Guardian Temple and helps get rid of the pursuers following the group, and afterwards explains to them that he was unable to mobilize the Royal Guard. With everything set, the party sets off to help the neighboring villages and towns under the rule of the Martial Guard.