Jack Van Burace was once known as Garrett Stampede, the Vambrace of the Fenril Knights of Arctica Castle. When that castle was assaulted by demons led by Zeikfried, he is saved by the delaying tactics of the Sword Princess Elmina. Realizing his true feelings for her only after her loss, and losing all that he had known in the attack, swore vengeance on the demons and became a wanderer.

At some point before the game's beginning, Garrett assumed the name 'Jack Van Burace' and became a drifter. He partnered up with the Wind Mouse Hanpan, and uses his Fast Draw techniques to deliver powerful blows to opponents. Jack hopes to boost his strength as well as find the "absolute power" to destroy the demons, a quest which eventually leads him to Lolithia's Tomb.

Jack's quest is largely about his own frustration at what he sees as his failure at Arctica Castle and his loss of Elmina. When his would-be love reappears as the corrupted Lady Harken, he must find the courage within himself to free her of the demon influence and continue on without the desire for revenge. It would be the courage that Jack finds during this confrontation that awakens Justine, the Guardian Lord of Courage.

As a character, Jack is a wise-cracking and world-savvy counter-point to Rudy's innocence and Cecilia's more isolated world view. It's clear that his younger comrades affect him, however, as he apologizes to them in earnest about keeping things from them, and openly considers them as friends. Even at the end of the game's adventure, Jack and Hanpan join with Rudy in setting off looking for new adventures - but not before Cecilia sneaks out to join them.

An optional quest in both versions of the game allows Jack to use the Guardian of Time, Dan Dairam, to reincarnate Elmina -afterwards she can be found, amnesiac, in Milamia village. Alter Code extends the sequence by allowing Jack to meet the new Elmina and have a more meaningful and promising exchange between them.

The character of Jack represents 'Courage' in the game's narrative.

In his search for the "Absolute Power", Jack has spent almost his entire life exploring and excavating ancient ruins. Jack's constant companion, a Wind Mouse named Hanpan, has helped Jack in his numerous excursions into the unknown. Aside from his friend, Jack has also come to rely on the "Fast Draw", an ancient sword technique similar to the gunslinger's quick draw. Behind his sarcastic facade lies a mysterious past. Jack was last seen exploring the ruins of the Memory Temple.

Jack is a Wanderer who specializes in 'excavating' ruins. He wanders in search of the "absolute power", which is believed to be located somewhere in the world. He wields a long, one-sided sword and is a master at fast draws. He accompanies Rudy and Cecilia to investigate a ruin excavation in the Adlehyde kingdom.

A drifter who wanders around Filgaia in search of the "Absolute Power". Wields a sword and travels with a talking Wind Mouse named Hanpan.

Jack makes use of various swords through the original Wild Arms game. (In ACF he uses his starting blade, the 'Arctic Blade', throughout.

Jack makes an appearance alongside Rudy and Cecilia when the player uses the Kindred Souls Force Ability. He even gets a spoken line, voiced by Yuri Lowenthal.

Jack is a drifter who wanders into Dean Stark's home town of Capo Bronco, looking for his Wind Mouse partner. 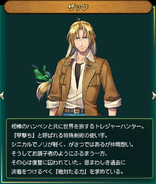