Gobs are a recurring type of monster in the series, first introduced in Wild Arms 2. (Though monsters known as goblins existed in Wild Arms and, based on their location and attacks, were likely an early concept for the gobs.) They are a small, diminutive race of monsters that are equivalent to a goblin, and come in a number of varieties.

In Wild Arms 2, they had somewhat alien-like design. But, starting with Wild Arms 3, they gained a look that's closer to a traditional goblin that was carried down to other titles, with an appearance that makes them resemble bandits. Gobs typically attack in packs, and in later games they can be accompanied by other gobs of their ilk, such as a Shotel Gob, or a Shield Gob. They usually tend to cause trouble for villagers, as in Wild Arms 3 and Wild Arms 5, where they played minor antagonistic roles, they steal food or other minor objects, or even bully the townspeople.

While they are usually early and mid game enemies, they can still be dangerous if underestimated.

In Wild Arms 4 Gobs have different specialties based on their titles and add attributes to the HEX they occupy. They can be found in any three floor dungeon and their levels match the current average level of the player's party. 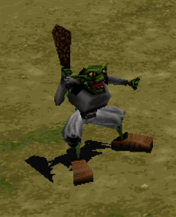 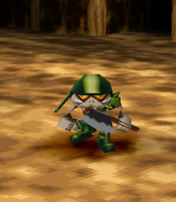