Gawn Brawdia (Japanese: ガウン・ブラウディア) is a supporting character of Wild Arms 4, who becomes an adversary during the game's second half. He turns out to be the mysterious 11th member of Lambda's Elite, the trump card of the Brionac group in that he is only used if all else fails, and is Lambda Zellweger's closest friend. His code name is Double Dragoon or Twin Gunner. He initially appears to be a bumbling, well-natured person, but that act belies a much more complex individual. Even after the revelation of who he is, Gawn turns out to be the most (and only) approachable adult that Jude Maverick's party encounters. Jude himself grows especially fond of him, and he may be the closest thing that Jude will ever come to having a father figure, while Arnaud Vasquez aspires to become an adult like Gawn someday.

Gawn is first seen looking for food when the group is wandering around in the Sea of Trees after escaping Wunderweltraum. He earns the group's trust when he rescues a citizen of the now-destroyed Ciel, and was trying to find food so he could heft him all the way to the nearby town of Guara Bobelo. Gawn then decides to travel with the group up to the end of Calucion Pass, as he is going in the same direction, looking for an old war comrade, Hauser Blackwell. He takes off after learning that the group is trying to keep Yulie Ahtreide away from Brionac, presumably to tell them where they are. Although first portrayed as a laid back buffoon, Gawn reveals a much more serious side when he ambushes the group at the Forgotten City of Verklarung, Raquel Applegate's destroyed hometown. As the group finds itself helpless inside the cordon, Yulie decides to give herself up to the Brionac Forces in order to save her friends' lives.

Despite the fact that he is a Brionac member, Gawn actually does care about the well-being of the party, and even questions Lambda's agenda. He even loses faith in himself when Jude loses his mother Ethelda Maverick while attempting to rescue her and Yulie from Garra de Leon, feeling indirectly responsible. He wields two very powerful six-shooters that can even shoot down missiles and keep him afloat in mid air, all at the same time. He uses this talent to save the party from 11 missiles fired at the party by Lambda during their flight to Illsveil Prison, and sacrifices himself by punching the last missile upon running out of ammunition. Jude and his party keep Gawn in their hearts as they move towards the future. 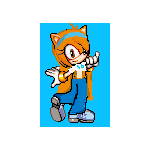 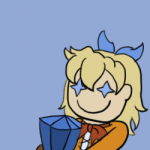