Fengalon is the Wind Guardian. He looks like a great white tiger and is one of the most frequently appearing Guardians in the series.

Fengalon's first appearance is during Rudy, Jack and Ceciliia's journey through Guardian Shrine, after exploring the site the group begins to have visions or illusions of what seems to be important and decisive moments from the past.

"I am the Wind Guardian. Fengalon. We are the spirits of the guardians. and we need your help." - Fengalon talking with the group in Guardian Shrine

After finally revealing her true form along with Moor Gault and Grudiev them telling that they don't have enough power to face the demons and would need the Tear Drop, Cecilia is amazed that the guardians know of the existence of this item, they tell that they are able to feel the power, power that would be the key to their existence and vital energy.

"We have our ways... We can sense the power of Tear Drop" - Fengalon after joining the group.

Along with the other two guardians, Fengalon then starts to guide and help the heroes and can be summoned through the Wind Rune during battles.

In WA2 Fengalon will be encountered during the heroes' adventure through Wind Tiger's Den .

"I,m Fengalon, the one who can't be controlled by anyone. I'm the Guardian of the Wind" - Fengalon introduced to the group

During the dialogue, the Fengalon Rune is obtained

"I'm Fed up with being restraiined by a Medium, I entrust my true release to you" - After that Fengalon starts to accompany the group during the journey.

In Wild Arms 3, Fengalon accompanies the group soon after the introductory dungeons, being possible to use it from the beginning of the game

In Wild Arms 4 he is known as Code F and is a Guardian Drive that can be summoned from the Wind (green) leypoint in a HEX field.

Wild Arms 4 is the only instance in which he does not appear as a white tiger. Rather he appears to be some sort of dinosaur creature similar to a raptor.

In Wild Arms 5, he has a wind-elemental TF System tower named after himself, known as "Tower F". 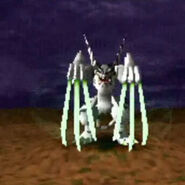 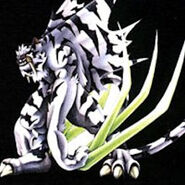 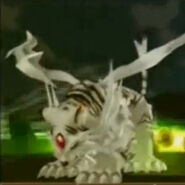 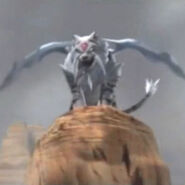 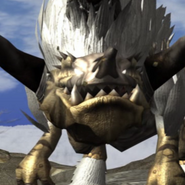 The four main guardians, Fengalon, Grudiev, Schturdark, and Moor Gault, are all based off the Four Symbols in Chinese mythology. Fengalon is based off of Jian Bing, the White Tiger.