Dean Stark (Japanese: ディーン・スターク) is the main protagonist and player character of Wild Arms 5. He initially leaves his village to help Avril Vent Fleur, a mysterious ingenue he meets, to recover her memories, along with childhood friend Rebecca Streisand while pursuing his dream of being a Golem Hunter on the side. As he travels throughout Filgaia, however, he learns of the racial injustices going on in the world and gets steeped in the larger plot as he seeks to become a catalyst for change. While he is known for his naivete, it is his very idealism that seems to charm and influence the other characters into following him.

He's lived in a provincial town all his life, and is fascinated by golems. His dream is to become a golem hunter and idolizes the top golem hunter, Nightburn. A bit immature for his age and pursues lofty boyish dreams. His best friend since childhood, Rebecca, keeps him in line with her quick wit, but Dean's more of a dreamer (too much so at times). It may appear as though Rebecca's constantly frustrated with Dean, trying to talk some sense into him, but they actually get along well. Dean's signature punchline is: "You can do anything as long as you don't give up!"

A 16-year-old boy who lives in the town of Capo Bronco. Upbeat and outgoing, with a strong sense of justice. He loves golems and one day dreams of becoming a great golem hunter and travelling across the world.

The young hero of Wild Arms 5, now the vanguard of Filgaia. Grew up in the village of Capo Bronco, dreaming of becoming a Golem Hunter. His love for golems continues unabated... even when they try to kill him.

As noted, his special ability has Dean preset as a major offensive unit - this can be bolstered with the Luck Medium and various badges. Generally speaking, he is very well balanced and can handle just about any situation. Furthermore, once equipped with the secret - Nine Lives armor - he can blaze through much of the early game without any assistance whatsoever on top of making him look like Lord Blazer.

In Wild Arms 5, Dean can adopt several different outfits depending upon the armor he has worn. Three of these outfits are based on the character designs from other Wild Arms games. 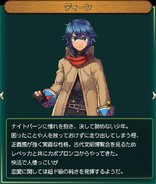 Wild Arms: Million Memories.
Add a photo to this gallery
Retrieved from "https://wildarms.fandom.com/wiki/Dean_Stark?oldid=12941"
Community content is available under CC-BY-SA unless otherwise noted.