Ashley Winchester (Japanese: アシュレー・ウィンチェスター) ({{{2}}}, Ashley Winchester (Japanese: アシュレー・ウィンチェスター)?) is the main character of Wild Arms 2. Ashley's story centers heavily on the conflicting nature of being a 'hero' as well as his emerging relationship with Marina Irington. Though conflicted, his resolve and maturity makes him the leader of the reformed Agile Remote Mission Squad ("ARMS") and his struggle with the demon within him, Lord Blazer provides the main plot of the game.

At the beginning of the game, he is an orphan who lost his parents in a previous war and is taken in by the Irington family in the town of Meria. He begins his adventuring career as a soldier under the service of Meria's king.

Ashley's first mission is to rescue Tony Stark from the Withered Ruins from a pair of would-be kidnappers. He successfully frees the child, but the ancient monster Kalivos is freed in the process. Disobeying orders, Ashley destroys Kalivos in order to save Tony, his kidnappers, and the other soldiers in the dungeon.

Though disciplined, Ashley is actually promoted to a special Musketeer unit called 'ARMS'. At the initiation ceremony, however, a demon gate is opened, transforming all in attendance (including Ashley) into monsters. Ashley survives by making contact with Argetlahm, the blade of the Sword Magess, and the power of the demon possessing him is barely kept in check. From then on, Ashley can call on the demon's power, in the form of Knight Blazer, but doing so risks Ashley's very soul.

The hero of Wild Arms 2. Spends his travels through Filgaia struggling against the demons -both figuratively and literally - inside him.

Though Ashley does not appear in the game per se, his ARM and many of his special abilities are used by the minor villain, Janus Cascade.

In a bit of background dialog, an adventurer is mentioned in Filgaia's recent past that retired after escaping Illsveil prison to own a bakery with his wife. Though not explicitly stated, the fact that this little story directly mirrors Ashley's history in Wild Arms 2 makes it a direct homage.

Along with his wife, Ashley owns the Irington Bakery in Twelbit as a non-player character, referencing his eventual fate within Wild Arms 2. Dean Stark can accept his side-quest to deliver a loaf of bread to Lilka Eleniak, who has again developed a crush on him.

Through the course of the game, Ashley has several different ARM-based attacks. 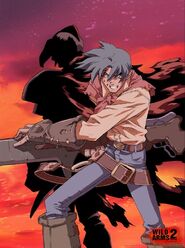 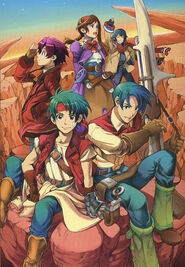 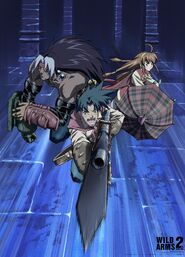 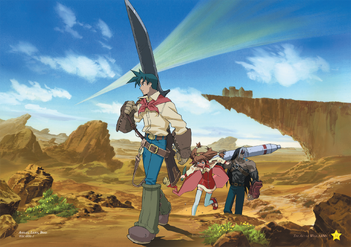 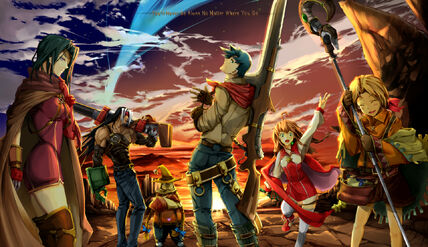 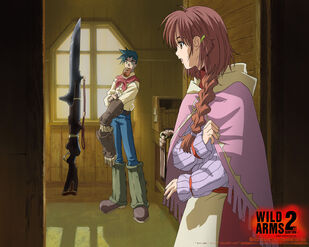